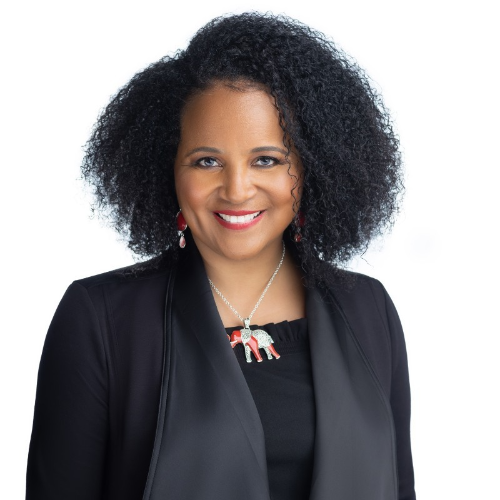 As Chief Equipping Officer (CEO) and founder of Menifield & Associates, LLC, Angela brings 28+ years of experience as a senior leader with the U.S. Department of Agriculture where she managed a national commodity grading program employing 3,500 – 4,000 employees annually and a budget exceeding $60 - $70 million.  Having worked her way up the professional ladder from an entry level employee to the most senior position of a civil servant, Angela realized her promotion to supervisor was based on her technical talents and abilities versus her interpersonal skills and capacity to lead.  As such, she learned quickly, the many pitfalls of supervising and experienced ‘Leadership Regret’.  Having had this as her personal journey, Angela purposed herself with ensuring other supervisors would be properly equipped for the transition.

As a result of her passion to equip supervisors and leaders for success, Angela stepped away from government service and founded her business and has now trained, mentored, coached and delivered content to tens of thousands of supervisors and leaders in the United States and abroad.  Today her clientele includes various government agencies, non-profits, corporations, small business owners and entrepreneurs.

Angela’s extensive background in Human Resources (HR), which includes earning a Master’s of Public Administration (MPA) in Human Resources, certifications as a Senior Professional Human Resources (SPHR) with the Human Resource Certification Institute (HRCI), Senior Certified Professional (SCP) with the Society of Human Resource Management (SHRM), and serving as an Adjunct Professor at St Joseph’s University in Brooklyn, New York, USA, (where she instructs and prepares other HR practitioners to earn their HR certification), in conjunction with her first-hand experience as a supervisor who leads with compassion and intention allows her to be an engaging, entertaining and educational speaker and trainer for companies and individuals.  Angela’s delivery style, passion for supervision and command of the stage sets her apart from your average trainer or keynote presenter.

Angela prides herself in ‘meeting people where they are’, leading with empathy and equipping with practical tools and resources to have immediate application from her presentations.  Angela utilizes her natural gifts and training skills to make even the most mundane of topics come to life and have meaning for the audience.  Understanding that many of the duties and assignments of leading and managing others are far from glamorous, Angela finds a way of upbuilding her audience and instilling a belief in both them and their abilities that leaves a lasting impact on both the individual and their organizations.

Angela is also an Independent Executive Director with the Maxwell Leadership Team (formerly the named the John Maxwell Team) and serves as a Faculty Member teaching and supporting new team members across the globe.  She is also a Launch Director for BNI New Jersey, USA and serves as a member of the BNI USA Diversity, Equity & Inclusion Committee.  One of her most memorable stage events includes having the honor of introducing her mentor and leadership guru, John C. Maxwell on stage at the International Maxwell Certification in front of an audience of approximately 3500.

Talk: Proper Documentation - The Insurance Every Supervisor/Manager Needs but Often Doesn't Have

Though often viewed as tedious, time consumptive and burdensome, having proper documentation has often determined whether an action or procedure is sustained or overturned in many an organization through the years.

The legal system is replete of examples of supervisors facing the reality that while not wrong, they lack the capacity of ability to prove that their decisions were correct, legal or approved.

Angela, who coins herself as the Documentation Queen, will share with the audience a perspective that will lead to many having a greater appreciation and value for how to properly document and the incentive to develop new practices to do so for the good of both themselves and their organizations.

As the saying goes, “If it’s not written, it never happened …”